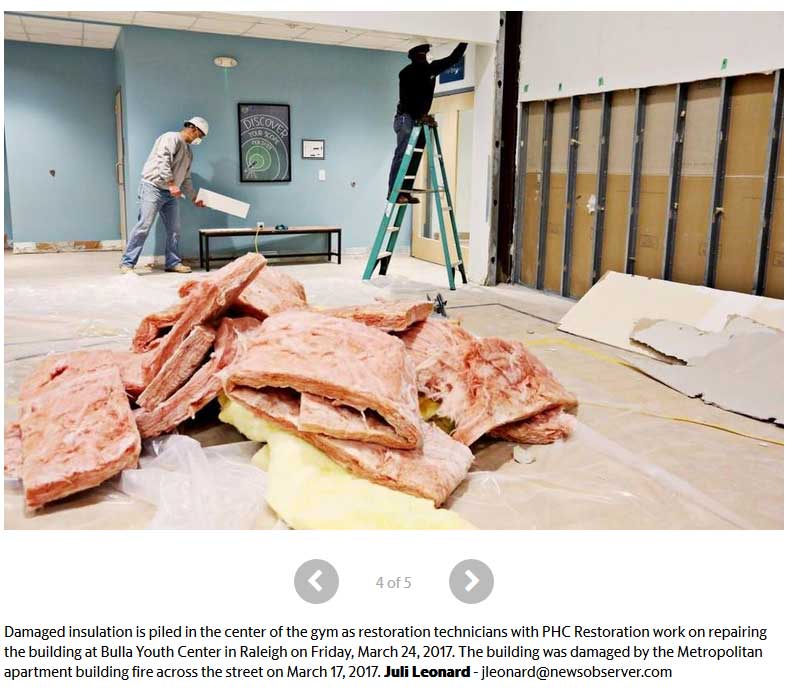 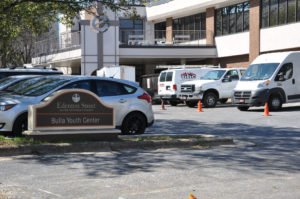 A 5-alarm fire broke out around 10:00 pm at the 400 block of West Jones Street in downtown Raleigh on March 16, 2017.  The fire consumed an under construction, 241-unit, five story, wood-framed apartment building which was approximately 40% complete.  Over 130 firefighters responded to the fire which was billed as one of the largest fires in Raleigh in nearly 100 years.  Power was lost to the area and streets were littered with charred debris.  Heat from the fire caused a crane to collapse and windows to shatter.  Firefighters had the fire under control by 1:00 am with damage limited to 10 neighboring buildings and only five severely damaged.  Only one firefighter was injured and thanks to the first responders, all residents of the neighboring apartment complexes were evacuated without any injuries. 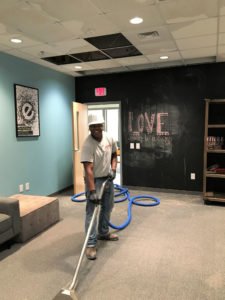 The Bulla Youth Center is an annex of the Edenton Street United Methodist Church and sits at the corner of Dawson and Jones Streets.  The 13,000 square foot, two story building was recently renovated and sits diagonally across the street from the scene of the fire.

Embers from the fire burned holes in the youth center’s flat roof.  Both the first and second floors sustained water damage as firefighters sprayed these hotspots.  PHC Restoration received a call from the church’s maintenance company Friday morning around 9:20 am.  The church was without power and in need of a generator.  Assistance was also needed to help extract standing water throughout the building.  We immediately assembled a crew at our Downtown Raleigh office and headed a few blocks north to start emergency services at the Youth Center. 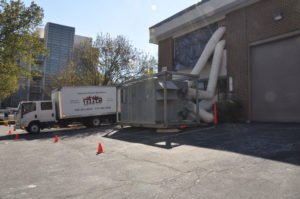 The church contacted a roofing company, and a temporary roof was being installed upon our arrival.   During the initial assessment, we were alerted to other immediate concerns on the scene.  The gymnasium was the most heavily affected room, and saving the floor became a top priority.  The exterior panes of the glass window that faced Jones Street were severely damaged and posed a risk of shattering to the ground below.    With severe weather forecasted for the next day, the glass needed to be removed to prevent additional water damage inside the building.  Street closures, media, onlookers, service personnel and parking also posed problems accessing the site.  Finally, there was an immediate need for a larger desiccant dehumidifier to aid in the drying process.  Media coverage from the largest news story in the state depicted the scene to be a logistical nightmare; however, our experience with these technical and challenging losses enabled us to spring right into action.  Katie Smith, CEO, and Hayes Fane, Restoration  Project Manager, were the first on site with portable extraction equipment.  The rest of the crew arrived with a flatbed trailer loaded with air movers, a truck mount extractor, OSB for board-up and desiccant ducting, hydroxyls and air scrubbers.  We quickly began removing wet ceiling tiles, extracting water and bagging collapsed ceiling tile.  As Hayes worked on a drying plan and instructed technicians on extraction and equipment placement, Katie and Operations Administrator Melissa jumped on the phones with vendors to arrange for same day delivery of a dumpster, desiccant dehumidifier and generator.  A glass company was on site and had removed the broken windows before 5:00 pm. 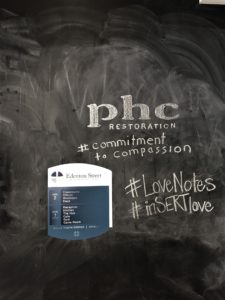 Our diligent work and quick action was evident by the time our EMS team left on Friday night.  The 15,000 CFM desiccant and the 250 KW generator were set up and running by 6:00 pm.  Air movers were placed by 7:00 pm, and the hydroxyls and air scrubbers were deodorizing by the end of the night.  In the next few days, we completed any necessary demolition along with the structural, carpet and duct cleaning to remove smoke odor from the building.  The gym floor was deemed dry on March 23.  Our restoration team worked tirelessly throughout the next 8 days to meet our ultimate goal:  to allow the church to resume services in the building at 11:00 am on March 26, 2017.