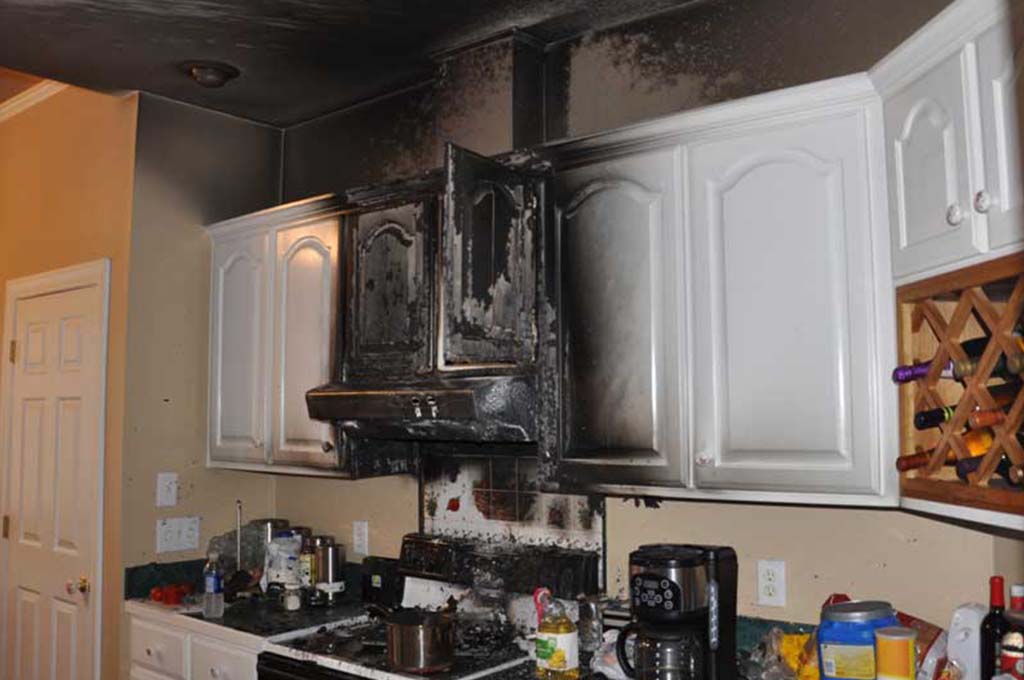 We often tend to worry about snow, ice and freezing temperatures this time a year as the biggest threats to damage our homes, and rightfully so.  Snow and ice can lead to ice damming causing damage to our roofs, the weight of snow and ice can cause tree limbs to fall on our homes and freezing temperatures can cause frozen water pipes and lots of water damage.  We all need to be aware that the threat of home fires also increases during the  winter months.

If we think about it, this fact isn’t surprising.  We stay inside more cooking during the winter months and multiple heat sources are used to keep our homes warm.  Cooking and heating are the number one and number two leading causes of home fires that lead to over $7.1 billion in fire damage between  2012-2014.  FEMA reports that reported home fires resulting from kitchen fires and heating peaked during the hours of 4pm-9pm.  Again this is logical since we often turn up the heat when we get home and start dinner at these times.

Distractions and unattended cooking are the leading causes of kitchen fires with frying as the leading cooking activity causing the fires.  Not all cooking fires are reported as most of them are small, contained fires; however, 25% of these kitchen fires extend beyond the kitchen.  Grease fires can vary in intensity and can spread rapidly. They burn very hot and because oil and water do not mix, they cannot be extinguished with water.  In fact, water can cause this burning oil to splash spreading the fire to surrounding counter tops and cabinets.  It can also quickly evaporate when it hits the high temperature grease causing a small explosion, increasing the intensity of the fire.  Though baking soda can be used to put out a grease fire, it is best to smoother the fire with a lid or pan. Try to avoid using a glass lid as the extreme heat can cause it to break.  There is also no reason to wait, call 911. They can always go back to the station if they aren’t needed.  Also, do not try to carry the burning oil out of the house.  Carrying it can cause the grease to splatter which could cause burns to yourself or spread the fire through the home.

Heating fires accounted for an average of 45,200 fires in the US from 2010-2012 and is the largest cause of fire related deaths among home fires.  Misuse of materials/products such as moving the heat source too close to combustibles, operational deficiencies, and machine malfunction are the top three factors leading to ignition.  Space heaters are one of the leading sources of heating fires, and as we bundle up and brace for the cold winter months, here are some safety tips to share to hopefully avoid fires caused by space heaters:

Home fire reported by the media:

February 2016–Fairfax County Fire and Rescue crews responding to an early evening fire in Centreville, Va, found fire and smoke coming from a three-story, middle-unit town house.  The fire was quickly extinguished.  Three occupants were displaced, however, and damage was estimated at $163,750.  Investigators determined that the cause of the fire was an unattended pot of oil left cooking on the stove.

March 2016–A kerosene heater that exploded after it was filled with gasoline caused a late afternoon house fire in Durham, NC.  Upon arrival, fire crews found fire and smoke coming from the roof and first floor of the home, but they were able to put it out in about 30 minutes.  While there were no injuries, the house was completely destroyed.

May 2014–An outdoor propane heater being used indoors resulted in a morning house fire in Forest Grove, Oregon.  The heater was being used to heat a room in the home’s basement when it ignited nearby combustible items.  While three people inside of the home at the time of the fire made it out safely, including two who were sleeping in the basement.

March 2014–A water heater that had just been replaced earlier that day caused a late night house fire in Allegan, Michigan.  The water heater exploded, causing home’s roof to collapse and sparking a fire that took firefighters several hours to extinguish.

To read the complete documents on Heating Fires and Residential Building fires or to learn more, visit www.nfpa.org and www.usfa.fema.gov/statistics.