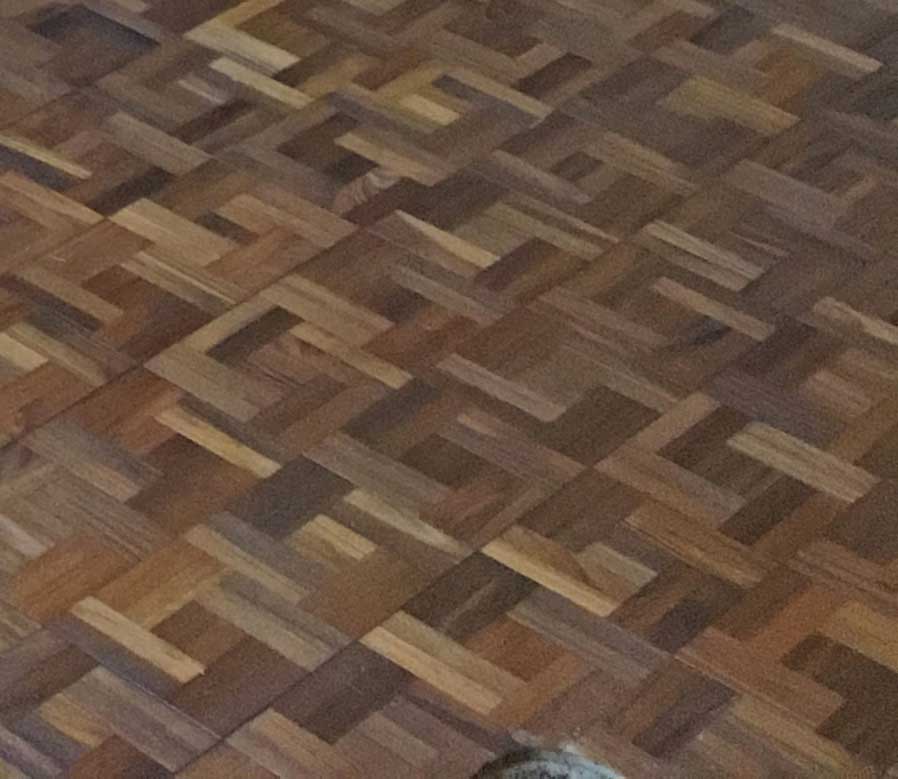 North Carolina is not typically known for experiencing extremely frigid winters, so when temperatures drop below freezing homes and water pipes are often caught off guard.  This was the case for a homeowner in Lillington, NC who returned home from a vacation in early January to find their guest bedroom, living room and rear entry had been flooded as a result of a malfunctioned geothermal heating system that caused water pipes in the attic to freeze.

The homeowner is a third generation contractor who holds personal licenses in electrical, plumbing, mechanical and building contracting.  He is also an accomplished designer and builder known for the quality of his work.  He spared no expense when building his own home; custom making the moldings, cabinetry and some of the furniture himself out of cherry, teak and mahogany.  The floor coverings were just as unique.  Wool carpet was imported from Italy and the living room floor was genuine Burmese teak parquet tile.

When our Emergency Services team arrived to the home, they were greeted with standing water on the floor and contents, fallen ceiling and sheetrock, and visible mold and mildew on the walls.  The parquet floor had already begun to come loose from the concrete slab.  We immediately began extraction and dehumidification while the contents were being inventoried and packed out.  It was also apparent that the hardwood floor could potentially be an issue, so we removed the affected tiles and individual wood pieces and began drying the remaining tiles in place.

As we began drying the parquet flooring, we soon realized it would pose the biggest challenge.  Over one-third of the living room floor sustained substantial water damage causing some of the 13” x 13” Burmese teak tiles to come loose from the concrete slab it was glued to.  Individual beveled wood pieces within these tiles also separated.  We quickly began looking into floor options available on the market that would match the existing floor allowing us to replace the part that was damaged, however, there were no items available that were the same size or contained the same beveled edges.   The homeowner, who wanted his home to be restored back to original condition, was reluctant in replacing the whole floor.  We were able to find a replacement option that was acceptable as a last option, but it carried a $55,000 price tag.  Before tearing up the remaining flooring, we found that many of the dried loose tiles were salvageable.  We then scoured the country finding individual beveled edged teak wood pieces to replace the damaged ones, and began piecing back the flooring tile by tile.  The tiles were arranged on a diagonal and the patterned and beveled edges meant only certain pieces could fit into specific places.  In the end, we hand placed, taped, glued and trimmed over 250 sq. ft. of affected flooring inch by inch.  The finishing touch was a screening process with four coats of teak oil hand rubbed into the surface.

The moldings and cabinetry also posed a challenge in which our talented carpenters tackled head on.  The cabinets, located directly under the frozen water line, were removed, brought into our shop and reconstructed with used reclaimed cherry that matched the age of the existing wood.  The custom moldings were recreated using custom ground router and sharper bits, matching seamlessly with the original moldings.

The entire repair was performed for just under the amount of the original quoted cost to replace the flooring materials due in large part to our mitigation team who was able to successfully dry the majority of the wood floor, our creative response to repairing the floor and the meticulous craftsmanship from our in-house carpentry team.