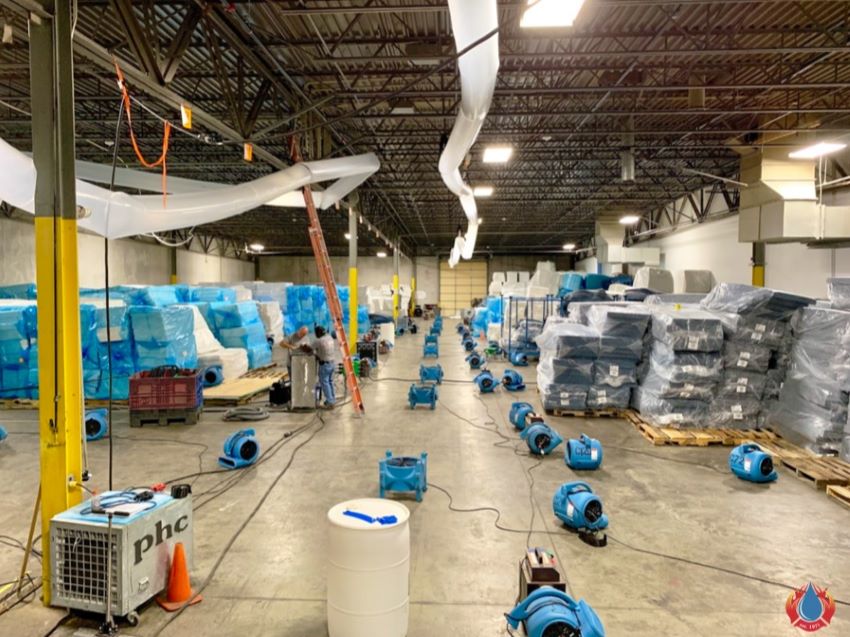 PHC Restoration was called to a commercial building in Fuquay-Varina at 2:00 am on Thursday, July 4, 2019 due to a fire in our client’s warehouse. The fire activated the sprinkler system, and once the fire trucks arrived, more water was used to extinguish the fire. Once the smoke cleared, the clients were left with a considerable amount of standing water and a significant fire odor, affecting over 50,000 square feet of their business.

When PHC’s Technical Director arrived on location, we were able to assess the damage and work with our client to establish priorities. Some of the issues we faced:

We began by addressing the water damage and performing water extraction throughout the affected area. While extracting, we moved damaged inventory outside and moved unaffected items onto pallets to allow for airflow to dry the concrete slab.

By the end of the first day, our trailer-mounted desiccant dehumidifier was up and running, pumping warm, dry air throughout the building. We supplemented the dehumidifier with air scrubbers and over 100 air movers to circulate the air.

Over the July 4th weekend, we removed affected drywall, cleaned work spaces and contents that were affected by soot and odor, and made paths for forklifts to safely maneuver through the warehouse on Monday morning. To address the fire odor throughout the building, we had 20 Odorox deodorizing machines delivered from Virginia to Fuquay. To ease concerns the client had over the integrity of the product, we put them in touch with the scientists at Odorox who guaranteed the process would not compromise the inventory we were deodorizing. Within 4 days, the odor was completely removed from the inventory.

Over the next two weeks we were on location every day cleaning the walls, the ceiling grid, and the ductwork for multiple HVAC systems. But, on Monday, July 8, our client opened their doors for business as usual. Many of their team members mentioned they couldn’t tell there was a fire! That’s because PHC’s team of dedicated restoration experts were up to the challenge of restoring the fire and water damage and meeting the goals set forth by the client. In the end, this Fuquay-Varina business experienced no business interruption from a large scale fire and water loss, thanks to a quick decision made by their facility managers to call PHC for immediate response.